To avert a strike that might have started as soon as Friday, September 16, freight rail firms and unions representing tens of thousands of employees secured a provisional agreement after all-night negotiations. The agreement includes increased pay for employees, and President Biden praised it as a win for both the employees and the railroad firms, who, in his words, “will remain a part of the core of the American economy for many years to come.”

However, the agreement sidesteps a bigger problem: the railroad sector is currently in trouble, and clients such as farm owners and power companies, as well as railroad executive officers themselves, say that the industry requires an overhaul. The agreement prevents what would have been an economically destructive strike.

During the epidemic, lockdowns followed by a spike in consumer demand caused supply chain delays, making it more difficult for consumers to obtain all from tampons to garages. The railroad business has suffered more in 2022 than it did at the beginning of the pandemic, even though shipping and trucking companies have started to recover from these problems. According to a survey of American Chemistry Council members, who move everything including ethanol to sulphuric by rail, 46% of businesses reported that delays and other service issues had become progressively worse since the end of 2021, while only 7% reported that the situation had improved. In a study of members, nearly 60% admitted to paying higher fees.

In a prepared statement for a Congressional hearing on September 15 on rail service issues and their effects on agriculture, Ian A. Jeffries, chief executive officer of the Association of American Railroads, stated that railroads “recognize that their service over the past year hasn’t been at a level their customers deserve and expect.”

As a result of reports it was receiving “from a broad variety of stakeholders regarding uneven and unsatisfactory rail service,” the Surface Transportation Authority scheduled a public hearing on “critical issues” in freight rail service in April. They were prompted to respond with details of how they intended to address these issues. The board then instructed the four largest railroads— CSX Transportation, BNSF Railway Company (BNSF), Union Pacific Railroad (UP), Inc. (CSX), and Norfolk Southern Railway (NSR)—to create service recovery plans and submit monthly updates on their progress after determining that their plans were insufficient. At the time, board chair Martin Oberman remarked, “We are in the midst of a rail service crisis and the Committee is still receiving reports of chronic, acute, and catastrophic issues in rail transportation, interrupting essential distribution networks and shutting down firms.”

According to Adriene Bailey, a partner in Oliver Wyman’s Transportation practice, more businesses will choose to transport goods by truck rather than by rail if there are no significant improvements in rail service. More accidents, greater damage, and more traffic congestion will result from this. Additionally, as rail is less expensive for businesses to transport goods across large distances, it can result in greater expenditures. Not to add that if railroads continue to lose market share, they will be forced to rip up tracks, fire workers, and reduce their networks.

According to Tony Hatch, a railway and terminal analyst who advises Wall Street, the prospective strike “was not the big issue in the long run.” The main concern is whether railroads will organize their service department.

Here are the following are the principal issues railroads face Even without this labor disagreement,

Railroads can’t get the staff

Working for a railroad looks like a nice job on paper. The average annual salary for rail workers is $160,000, as reported by the Association of American Railroads, and no college degree is required.

However, employees claim that the last two years have been exceedingly difficult. That’s partly due to the pandemic, but it’s also because the main railroads have been drastically cutting staff for years, forcing workers to take on more responsibilities.

According to Oberman‘s testimony before Congress, Class 1 railroads have reduced their workforce by 29%, or 45,000 personnel, during the past six years. To achieve the level of efficiency demanded by investors, some of these cutbacks were made to administrative staff. However, Bailey claims that some of them, particularly at the start of the epidemic, were made for talented workers.

Railroads are currently making every effort to hire new employees. Railroads’ recruitment efforts, according to ARR’s Jeffries, may be beginning to pay off. He claims that employment among Class I railways, the largest businesses, increased 4.2% between February and July this year after providing thousands of dollars in signing incentives and bonuses to staff to transfer to locations experiencing demand.

However, Bailey is concerned that people don’t want to perform physically demanding jobs that force them to spend a lot of time away from home or relocate far from their loved ones. She claims that many employees who begin training programs with railroads do not complete them. The labor shortage that the railroads are attempting to solve on their own is “bringing to bear this shift in employee mentality.”

With fewer workers, those who are left must work much longer shifts to fulfill the railroad’s operating hours, which creates a vicious cycle. Workers “are falling like flies,” according to a conductor for Union Pacific, in part because hours that were once eight or nine hours long now are up to 19 hours. 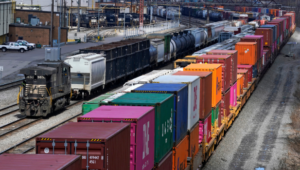 Numerous businesses in the United States are struggling with a lack of qualified workers, but railroads are particularly affected. If Walmart has an adequate number of employees on the coast and not enough in the center of the nation, the issue only affects that region. However, because railroads are interconnected networks, if a railroad in the center of the country has a significant personnel gap, it will create service delays on both sides.

This issue extends beyond staffing. Due to the cost of returning them empty and the lack of means to transfer them, containers that were sent inland during the pandemic ended up remaining there. Due to overcrowded warehouses and a lack of personnel or equipment to transfer the containers, some cartons still are stuck there, according to Bailey. This causes delays across the nation.

Even with 10,020 workers, according to Bailey, “if I have two or three places of my network where I cannot reach the people, the system has grown fragmented and backed up, and the cars aren’t flowing.” It’s one of the drawbacks of attempting to support modern business with a system that was created when horses were the major rival.

Railroads were already losing market shares to transportation firms before the outbreak. According to Bailey, the trucking sector is expanding far more quickly than the rail industry as the cargo market in the United States expands. That’s because a lot of businesses that transport goods claim that they’ve had negative experiences doing it by train.

In a survey of business executives conducted by Oliver Wyman’s Bailey, all of the executives questioned said that truck freight was superior to rail. According to executives, trucks were much more likely to arrive on schedule, and when they didn’t, businesses would phone and let them know where their products were and when they’d come. Railroads, on the other hand, frequently struggled to provide much information regarding the location of companies’ containers and the cause of delays.

Even before COVID, according to Bailey, “the level we were operating at was insufficient to create success and expansion for the sector moving forward.” The operational model needs to fundamentally change and be improved by the railroads.

According to her, railroad CEOs have discussed investing heavily in their system and investing money to eventually increase their market share. However, investors haven’t been as encouraging. According to Bailey, during quarterly earnings, investors have mostly paid attention to operating margins and short-term profits, which are effectively the railroad’s profits per dollar of sales.

The kind of quality service that shippers require must be delivered via a highly dependable, predictive scheduled network, according to Bailey. “I really believe that we can achieve our goals. However, the industry hasn’t yet demonstrated that it can achieve that.

Technological upgrades have been delayed

Most people haven’t given automated trains much thought, although they would operate on rails rather than on public roads, presumably making them a far safer alternative, despite America’s fascination with autonomous vehicles and trucks. However, according to expert Hatch, there is a lot of technology already in place that could improve railroad efficiency. However, rules might prevent them from becoming put into practice.

For instance, the government mandated that almost all railroads install a device called Positive Train Control following a fatal 2008 train collision in Chatsworth, California, that National Transportation Board blamed on a train conductor who was texting (PTC). Positive Rail Control, which may halt or slow down trains that are moving too quickly and can override operator errors, was installed in all necessary trains as of December 29, 2020. The railroad operators have claimed that some trains must be able to run with one-person crews rather than two-person crews because PTC can be controlled from a central dispatch system.

Despite the Federal Railroad Administration’s 2009 statement that there wasn’t any evidence to back restrictions on one-person train crews, the same organization in July 2022 proposed a regulation requiring a minimum of two crew members for the majority of rail operations. Rail businesses contend that there is no safety rationale for doing this and that the state should permit railways and unions to set the amount of train personnel through collective bargaining. As stated by the Association of American Railroads, throughout time, collective bargaining agreements have resulted in the reduction of railroad crews from five to three, then to two.

Similar objections concerning automated rail inspection programs have been made by train companies. To examine a train and see under the cars, conductors currently have had to walk the entire length of the train. It can take a while to move freight trains that are larger than a mile. Several railroads have acquired federal authority to test Automated Track Inspection technology, which enables railroads to perform this using laser and cameras, in some locations. However, some of those test projects were allowed to expire by the Federal Railroad Administration, and although railroads are challenging the decision, experts like Hatch are concerned that the government may obstruct the development of the technologies railroads have to survive. He claims that while this technology may alter the nature of railway work, it is crucial for the sustainability of the sector.

He asserts that railroad firms “ought to be permitted to benefit from technological improvement.”

“Railroads must be able to invest in technology, which may result in job losses, but if the price per train starts to drop, you can engage in a different form of business,”